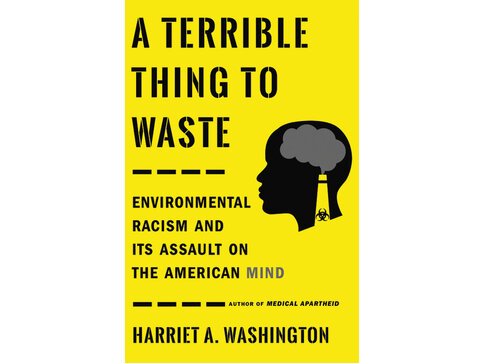 A TERRIBLE THING TO WASTE: Environmental Racism and Its Assault on the American Mind by Harriet A. Washington

I completed reading the Hachette/Little, Brown Spark publication, A Terrible Thing to Waste: Environmental Racism and Its Assault on the American Mind (2019) by Harriet A. Washington, which was released in July 2019: https://www.littlebrown.com/titles/harriet-a-washington/a-terrible-thing-to-waste/9780316509435/ My review of the book for Booklist Magazine didn't make it to publication but can be found on Medium at https://link.medium.com/ux9wp6eVicb Washington lists so many environmental problems and their ensuing health damage to various communities across the country, especially African American, past and present and, arguably, future -- she does mention the rollbacks in protections that the Trump Administration has put in motion. Recent news stories bear this out -- and yes, dealing with climate change is part of this as well. And I have also noted the various environmental justice organizations and other activists fighting for America to have clean and non-toxic air, water, and land. And while Washington's focus was on African Americans, as historically we've been the most hurt in these situations in America, these environmental dangers are happening in poor and vulnerable communities across the country and around the world--and are now spreading to communities that aren't poor. FLINT, MICHIGAN STILL DOESN'T HAVE CLEAN WATER! AND IT'S NOT THE ONLY ONE!

Flow: How Can Drinking Water Get Contaminated?