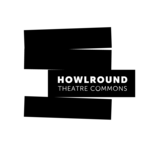 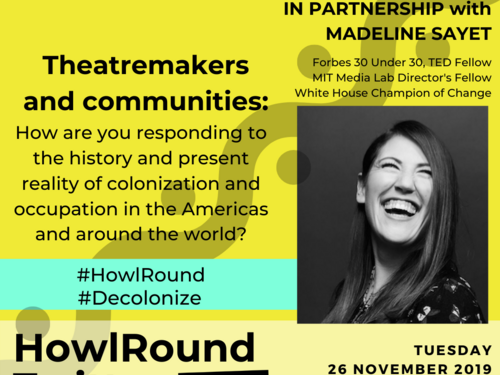 Join HowlRound Theatre Commons, Madeline Sayet, and other theatremakers in a conversation exploring responses to a growing consciousness of colonization and occupation across the globe. Share your experiences and take note of what others are doing in community. Question: How are you, as a theatremaker, responding to the history and present reality of colonization and occupation in the Americas and around the world? When: Tuesday, 26 November 2019 09:30-10:30 A.M. AKST 10:30-11:30 A.M. PST 12:30-01:30 p.m. CST 1:30-2:30 p.m. EST Where: Twitter, using the hashtag: #howlround Madeline Sayet will be joining us to co-moderate this discussion. Madeline Sayet is Executive Director of the Yale Indigenous Performing Arts Program (YIPAP). For her work as a director, she was named to Forbes’ 2018 30 Under 30 List in Hollywood & Entertainment and has been honored as a MIT Media Lab Director’s Fellow. Sayet was also a recipient of The White House Champion of Change Award from President Obama. A member of the Mohegan nation, she was deeply influenced by the stories and oral traditions passed down to her by her great-aunt Gladys Tantaquidgeon, former Medicine Woman, and her mother Melissa Tantaquidgeon Zobel, current Medicine Woman.

Check out our recommendations for this collection, hand-picked by our editors!
265 item